A neckbeard, in literal terms, is hair covering the neck but not the face (see above). However, the term is often used to describe the kind of person who chooses to sport such a facial abomination. Neckbeards are self-satisfied nerds who wear fedoras and read the novels of Orson Scott Card. They can usually be found on message boards, complaining about immigration and “misandry”. Many people think that the Neckbeard phenomenon is a fairly recent one, perhaps dating back to no earlier than the invention of modem. However, I have discovered a much earlier specimen: Richard Wagner, the subject of the above painting.

Below are six reasons why Wagner was the original Neckbeard…

Wagner’s Ring Cycle is said to have been a huge influence on J.R.R. Tolkien, author of the Neckbeard’s favourite book, Lord of the Rings. Both works feature the fight for a ring of power that corrupts those who use it. This wasn’t Wagner’s only brush with mythology; Wagner’s first opera Die Feen has shades of Arwen and Aragorn, it being the story of a woman from the fairy world who marries a mortal king.

Okay, I suppose this one goes without saying. Anybody who writes a fifteen-hour-long opera cycle could hardly be called unpretentious. He believed that his works were so superior that they were a whole new form of expression, which referred to as “complete works of art”. This egomania led to a sense of entitlement: “The world owes me a living,” he claimed. And when he misbehaved (which did often), he didn’t believe he could be judged by the same standards of everybody else, because he was an artist.

3)    He had terrible fashion sense

It wasn’t just the beard; Wagner spent a fortune on terrible clothes. He wore satin jackets, fur-lined silk slippers, and Russian-leather booties. He also wore this hat, which is basically the 19th century equivalent of the fedora… 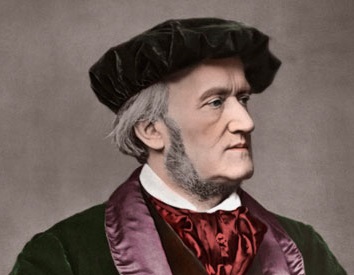 5)    He had a horrible attitude towards women

Wagner might have had more success with the ladies than most modern Neckbeards, but it wasn’t because he treated women with any respect. His biography is full of women that he wooed and then soon discarded. He found himself a patron called Otto Wesendonck, who built a house especially for Wagner. He repaid this favour by having an affair with Wesendonck’s wife, right under his own wife’s nose. Pretty soon, he turned his back on both these women and was chasing someone else.

It wasn’t just Wesendonck that Wagner used for his own ends; he was forever schmoozing rich people that could help his career and pay off his debts. Early in his career, whilst in Paris, he tried to ingratiate himself with the successful Jewish composer Giacomo Meyerbeer. He addressed letters to him as “Master” and signed them “Your slave”. Meyerbeer used his influence to help bring the younger composer’s operas to the stage. However, Wagner would later turn against Meyerbeer in the worst possible way…

6)    He was incredibly bigoted

These days, Wagner is as famous for his anti-Semitism as for his music. He wrote an essay called Jewishness in Music, in which he argued that no Jewish person could write a true piece of music because they had no link to the spirit of the German people. He later called out Giacomo Meyerbeer by name, calling him “a Jew banker who happened to write music”. Yikes!