10 Music-Related Facts That Will Make You Feel Old

Ben Folds once sang: “Seconds pass slowly / and years go flying by”, and truer words have never been sung. Because I’m a cruel, cruel man, I’ve compiled a list of ten facts from the world of music that will make you feel like life is quickly passing you by…

The youngest member of Hanson is married with three children

Zac Hanson, the band’s drummer, was only twelve when “MMMBop” was released. So fresh-faced was this little mite, that many people mistook him for a girl. As he sold millions of records, and was one of the youngest people ever to get nominated for a Grammy, I’m sure he didn’t lose any sleep over it. He was married in 2006 and had his first child in 2008.

People born in the same year as “Blur vs. Oasis” are now adults

Do the maths: 1995 to 2013 = 18 years. It’s crazy to think that people starting university this year were born after the “Country House” vs. “Roll With It” chart battle. They’re probably sitting in common rooms right now, reminiscing about the bands they liked when they were kids, like The White Stripes.

The “Artist Formerly Known as Prince” debacle was 20 years ago

Can it really be that long ago that Prince changed his name to a symbol? People still seem to be making jokes about it. Contrary to popular belief, it wasn’t just because of his self-styled eccentricity; he did it to mess with his record company, Warner Bros., with whom he was having major disagreements. When his contract with Warners ended, he went back to being plain old Prince.

Mozart was only 35 when he died

A lot has been written about the “27 Club”, which is the supposedly high number of rock stars who died aged 27. What’s more shocking is the fact that Mozart, one of the undisputed geniuses of Western music, was only thirty-five when he died. He composed his first symphony at 8, went on to write about fifty more symphonies, along with twenty-two operas, and twenty-seven piano concertos. He clearly believed it was better to burn out than to fade away.

Marshall Mathers referenced his daughter Hailie in several songs, including his guest spot on “Forgot About Dre”. In that song, he implies that his infant daughter is in danger of being taken away by the authorities, and we hear a baby’s voice saying, “Dada”. Well, the kid in question is now old enough to drive. Eminem himself is 40, but he only seems young because he’s a perennial brat.

When Winwood sang “I’m a Man!” in 1967, it was only just true, as he was only 18 years old. He might have sounded older than his years, but he truly was an early starter. He joined The Spencer Davis Group aged 15, and by 19 had already left to form his own band, Traffic.

iPods have been around for 12 years

The first generation iPod, which featured 5GB of storage and that irritating click-wheel thingy, was released in 2001. These are now so old that hipsters can use them ironically. The iPod wasn’t even the first portable MP3 player on the market; the first model, the “MPMan” was released in Asia in 1998.

You’ll no doubt remember this album cover; it features a baby swimming after a dollar bill, symbolising how we’re all conditioned from birth to chase after money. Subtlety wasn’t really one of Nirvana’s strong suits. A couple of years ago, the now grownup baby-man re-enacted the famous swimming pool photo. Thankfully, he had shorts on that time.

It’s generally though that Nu Metal began almost twenty years ago with the release of KoЯn’s first album. The genre became increasingly popular throughout the mid to late nineties, with millions of records, and an even a greater number of hoodies, being sold. The undisputed low water mark came thirteen years ago, with Limp Bizkit’s execrable Chocolate Starfish and the Hot Dog Flavored Water. Luckily, few people talk about Nu Metal anymore, and the hoodies have long since been landfilled.

Paul McCartney was only 27 when The Beatles broke up

What the….? Oh, he was almost 28? Well, that makes me feel a bit better, then. Look how pleased with himself he was… 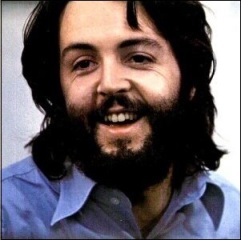